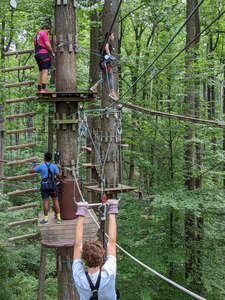 Robert had the excellent idea to celebrate his birthday at The Sandy Springs Adventure Park.

It had been years since we were here last.

Sarah Z. was under the weather and not able to join us.

We thought Pocket (Sarah P. from the Alexandria Medical Reserve Corps) might be able to join us, but she also had to drop out.

But Robert, Will, Abdel and I had blast.

Robert and I, obviously, had been there before.

Will had as well (though not with us).

Abdel was new to this kind of craziness. 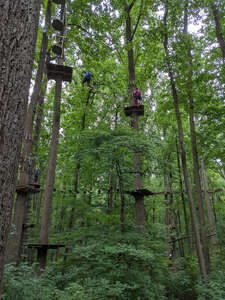 Abdel’s timing was perfect. Coming home from an early start program at college just in time to take Pocket’s spot on the trip.

We started with a green to get used to the park — actually Robert and I on one and Will and Abdel on another.

Then we joined up for blue (which was slowed down by someone ahead of us who couldn’t calm down enough to get across one of the “features”).

Clearly not having fun, one of the staff came up and helped her bail out mid-course.

Watching how that staffer made that feature look really easy was deceiving. There is clearly an advantage to familiarity. 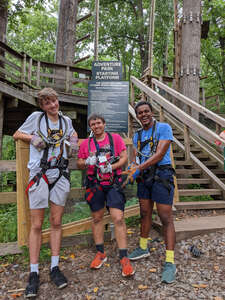 After that, we split up again. I went back to a fun green (with thoughts of a blue afterwards). The boys, who heard that the double black really should be first or you’d be too tired, opted for the single black.

I choose to watch a bit from the ground rather than pushing for that last blue.

The black seemed to have lived up to it’s reputation looking at the boys as they came back; smiling, but gassed/

We finished the day with the excellent cake Sarah made and watching the Hungarian F1 race.