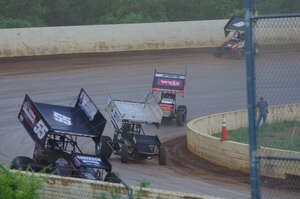 Robert took Sarah to a dirt track race for her birthday.

Sarah agreed that would make a nice present.

We had planned to go back to Hagerstown (where Robert and Will and I went), but they have been hosting — or at least serving as basecamp — for the “Peoples Convoy.”

That was a turn off. So Robert found that Winchester, pretty much the same hour plus from Alexandria, had races on Sarah’s birthday. (You can ask him about the app the next time you see him.)

I think that Sarah will agree: sprint cars are weird. It turns out this was the first time sprint cars had been back to Winchester in eight years. Clearly, the planets were aligning for the birthday celebration.

And it wasn’t just sprint cars, they had a full evening’s entertainment lined up for the dirt track racing fans.

It was a most unusual birthday celebration (even announced over the PA system).