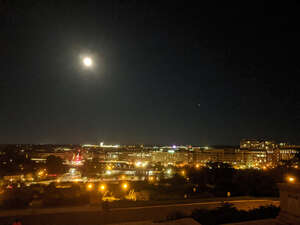 We’ve walked up the steps at the Masonic Memorial several times to see a launch from Wallops. But this is the first time they have actually launched.

We’ve had technical issues and boats in the area. Well, NASA has had those problems, we’ve just been robbed of the view by those problems.

Tonight was perfect: Antares rocket and Cygnus spacecraft launched on time from the Mid Atlantic Regional Spaceport (MARS, for short) for the ISS carrying supplies.

They named the Cygnus the S.S. Kalpana Chawla in honor of one of the astronauts lost on the Columbia in 2003. 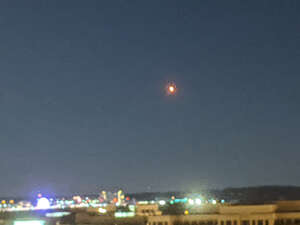 Click on the photo above: Mars to the left of moon, the S.S. Kalpana Chawla lower and right of center. The photo at left is the rocket but zoomed in on the phone — not the best quality.

(I brought my better camera last time, but the missions have been scrubbed so many times I skipped it tonight.)