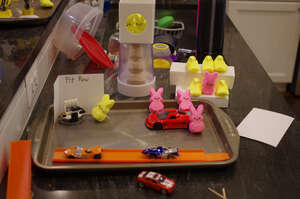 And we’ve been watching the Netflix series, F1 Drive to Survive, and that was clearly an influence on Sarah’s Peep diorama this year.

(I prefer to think it was the show and not Robert’s learner’s permit that supplied the inspiration.)

Red Bull is one (actually, two) of the teams in the Formula One circuit that the show has followed over a couple seasons. Here, played out in Peeps…

Clearly there are some non-peepy elements to this diorama.

But the hot wheel track, cars and Ferrari model really give it some authenticity.

And pit row and reviewing stands bring it all together.

(Just ignore the sink and dishes in the background.) 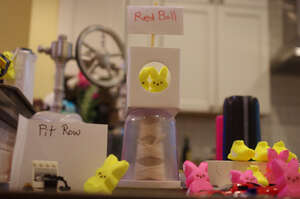