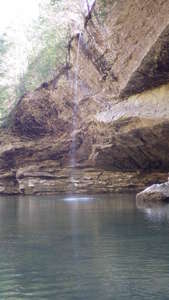 With Robert delivered to Space Camp (more on that shortly), I went in search of a place to put my boat in the water.


The weather was fantastic!

The Sipsey is the only Wild and Scenic river in Alabama. It was pretty low. And with just me, I decided to see how far up I could get from the take out.

I’ll have to consult the GPS location that hopefully the camera captured, but I’m going to guess about three quarters of a mile.

The current was not too strong, but it was steady. And I had to get out at one spot (my canoe is not a speedy boat, designed to turn rather than track or go fast).

As you can see, it was beautiful!

There were several spots where the rocks overhanging the river dripped in water. This waterfall was just at the bridge. Further up, there were a couple small creeks that tumbled down to the stream bed.

One I could hear in the woods just a little ways back from the shore, but it disappeared underground before it made it to the river bank. I thought that was odd, but probably part of it being a bit low.

Eventually, I thought I’d had enough going against the flow and found myself at another spot I would have to get out and pull the boat upstream.

so I headed back down (after a snack of a couple Mandarin oranges — thanks SZap). 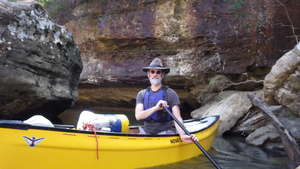 All in all, a very nice afternoon in a very pretty spot.

(Don’t be fooled by the selfie, it really wasn’t that narrow, but the rocks made a good perch for the camera on timer.)