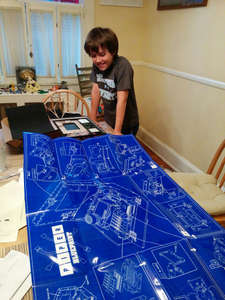 We were a bit thrown off at first, but then the blueprint made sense and now Robert has a Raspberry Pi Minecraft machine of his very own.

It was late when it was finally together (we started after dinner and I had a family hangout to attend to) so reviews will have to come later (and hopefully) from Robert.

I pronounce the construction a success; especially after understanding that wiring up the buttons and breadboard is covered onscreen, after booting up.