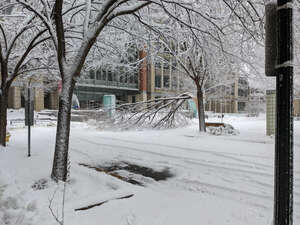 We had a great heavy, big (for us) snowstorm last week.

Unfortunately, it came on the heals of the holiday break.

So while I walked in to the (closed) office, Robert got to get out the sleds and enjoy the snow.

He also took on the lion’s share of clearing the sidewalk and car.

I wish I’d been able to join in the sledding, but “Closed” has a new meaning in the Telework age. In the federal space, weather events can close access to the buildings, but you’re still expected to telework if you can. 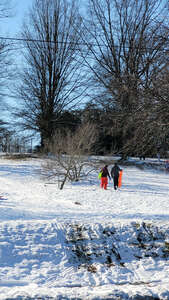 While I could, I’m more productive in the office and had that option (even though we were closed). So, after two weeks off, I went in and missed on the sledding. (I did get to join him and Ian on a hill in Seattle while we were there.)

Sarah, who took that photo, split her time between telework and some snow enjoyment.

Between that snow, and a refreeze and second, smaller snow, Robert’s holiday break grew by a week — but he did have some on-line classes to pay attention to.

He’s happy to be back in school, in person now. And I expect, Will, who joined him on the slopes, agrees.