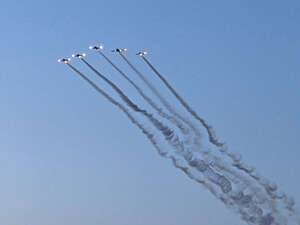 The Xfinity series flyover was Chinook helicopters and impressive.

The Cup series flyover were these guys. I didn’t get a picture of the trail of sparks that came off their wings on the first pass.

After the sparkler run and this formation smoke run, they came back one at a time to do laps around the course. 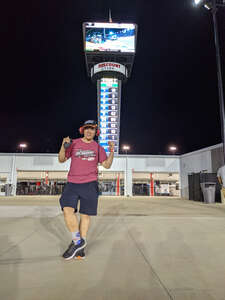 Robert and Sarah (the experienced Richmond Raceway part of the family) said that’s what they did on the other race they went to this summer.

We were able (thank you Sarah) to get into the infield and Robert and I discovered (well, Robert saw with the binoculars) that the concession lines were a lot shorter there.

So we went under the track, during the race, to get a bit of dinner. And we took advantage of that time for a photo opportunity with the screen and standings sign.

I was a bit skeptical beforehand. And I think I like the pace of F1 better. But it was a really fun day.

The pure sound and feel as the cars went by (even up in the stands) was impressive. But I really think Sarah’s Bose noise cancelling headphones were as impressive.

The rented scanner was fun, we mostly listened to the Motorsports Radio channel. But with Sarah’s headphones you could hear more of the stadium announcer and crowd while the engine noise was impressively dampened.

Truely the full NASCAR experience, even down to the burnouts by the winners of the two races…